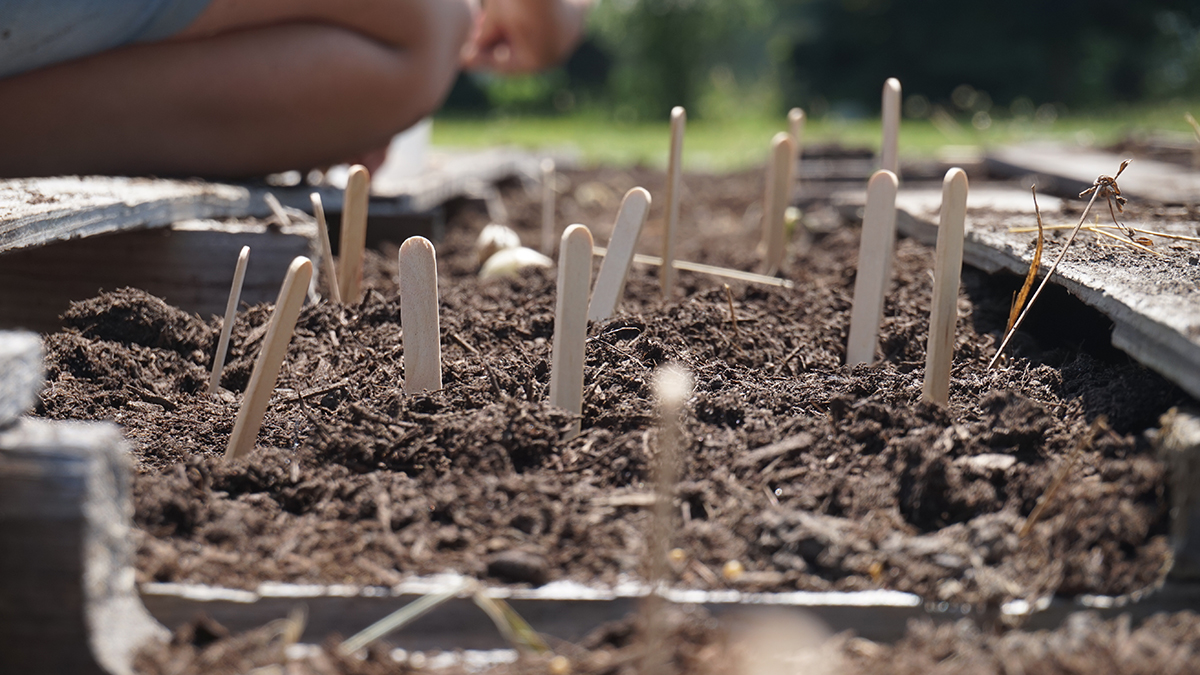 Aaron and I started BUG – Building Urban Growers, with much anticipation and prayer. To us, this is more than just a program – it is shaping a generation.

Day 1 of our co-ed program is exclusively girls, six of them! We kicked off with painting stars to stick in the ground on their dedicated plots! Each girl planted seeds in their bed and marked out what was what! One girl asked for popsicle sticks to put in the ground, the idea was a hit and before long the beds looked like popsicle stick forests!

…before long the beds looked like popsicle stick forests!

When you get invaded in a good way, Seneca-Babcock kids tend to respond really well! On day 3, our group of ten (now with one boy) greeted a missions team from Philadelphia. We did some ice breakers that mingled them up, then they became fast friends!

We painted the new and improved BUG sign that I had designed. This was to replace the previous years’ sign that had been vandalized. The kids had a blast doing it and came up with some creative paint ideas that added a lot!

On Day 7 we drove to Buffalo’s west side to visit 5 Loaves Farm! One of our kids was having some conflict and wanted to go home. I sat down and talked to him about it and convinced him to be my helper for the day. He liked that idea, and he soon forgot about the argument and had a great time.

5 Loaves Farm is an urban farm and market garden in the West Side. Matt Kauffman, the farm’s director, was so good at teaching the kids about the farm’s objectives and gave them a lot of his time!

He took them on a tour of the farm, played a game with them, and showed them the chickens. The kids liked the chickens the best! One of them was in utter shock that they ate the chicken’s eggs! Funny kids!

Matt took them on a tour of the farm, played a game with them, and showed them the chickens.

Our second field trip was a bit further afield. We went to visit my friend Pastor Lynne Hill at Hope on the Hill Church in Holland, NY.

After a short nature walk full of typical childish complaining I set them a challenge. Whoever could go one hour without complaining would get a twix! They accepted the challenge and to my surprise every single one of them got the twix. It’s amazing how tricks like this work with our youth group. Youth ministry is a lot about parenting. Kids don’t need a buddy, they need solid, loving parental voices in their lives. They need mothers and fathers.

The kids had a blast making s’mores and cooking campfire dogs! To top it off we went for a very loud and raucous hayride. I’m sure you could hear the BUG kids songs echoing around all the hills in Holland that day!

The Final Day of BUG

On the final day of BUG we had invited all the families to come to a BIG cookout! We were a little gutted that only three kids were able to come that day (the lowest attendance of the whole program). One of the girls brought her mum, brother and two sisters. Also, three boys from the neighborhood came by and gobbled up food as boys do so well!

Ruth brought Elijah, Isobel and Luke to see what it was all about and Brad and Carol brought Elanor! We jokingly laid plans for BUG junior, but I’m seriously considering it – just saying!

We kept it really low-key, but had a time for the kids to show off their garden plots and an award ceremony! We couldn’t decide on a winner for the BUG award, so we split it up between the seven core girls. We chose an attribute that we admired for each one and put it on their certificates!

Overall, BUG was a great success! I love the concept that Promise Valley has for this program and I think it could be a model that could be used in cities all over the country.

Though I do breathe out a sigh of relief, I do miss it. I know that we will see all of these kids at either Jesus Kids or Youth Group in the Fall where they will receive further discipleship and mentoring from the Steps team!

Building Urban Growers is a program of Promise Valley. Read more about Promise Valley’s Vision and heart at senecagospelmission.nationbuilder.com.